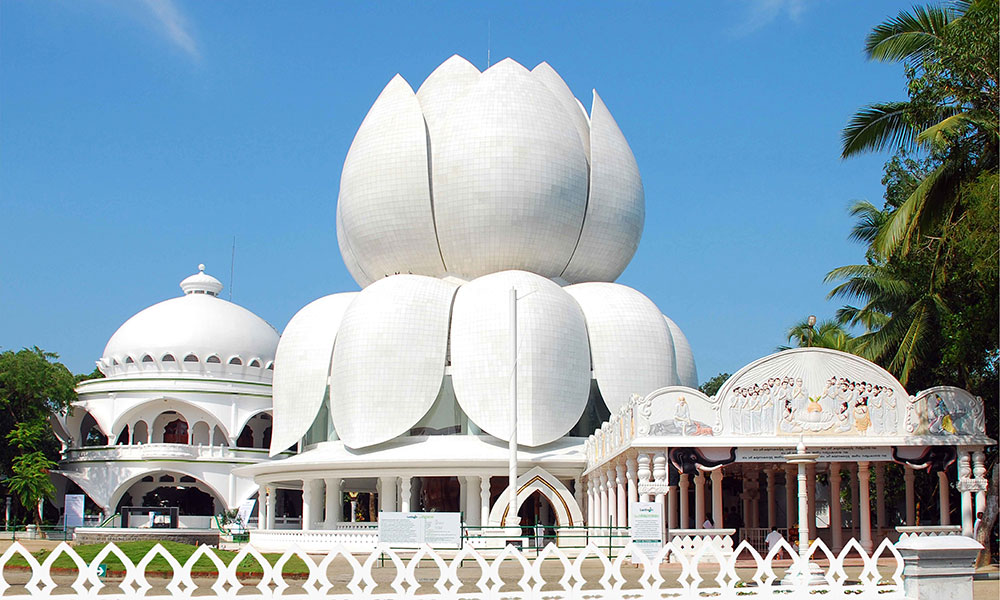 The original ‘Parnasala’ of Guru was a thatched hut (Parna means leaf and Sala a room or hall in Sanskrit), reflecting Guru’s inherent simplicity and austerity. Guru lived and interacted with visitors in this simple structure consisting of a thatched roof supported by four poles. Thousands were initiated to the spiritual path at its doorstep. Later, the thatched hut was converted into a one-room tenement with a tiled roof.

After Guru merged into ‘Adisankalpam’ (the plane of primordial consciousness), it was revealed from the Supreme Light that the Guru’s body should be laid to rest in the Parnasala itself. Guru’s body has been placed inside a marble casket and kept in the sanctum sanctorum of the Parnasala, which is now raised as a magnificent building, in keeping with its Divine significance.

The Lotus Parnasala of Navajyothi Sree Karunakara Guru is built in the shape of a blooming Lotus. This sacred monument is the biggest of its kind in the world. The Guru, who left His mortal body on May 6, 1999, rests here as the transforming Spirit of the age. The lamp lit by Guru is still burning in the Parnasala.

The model for the Lotus Parnasala was conceived by the present spiritual Head, Her Holiness Sishyapoojitha Amritha Jnana Thapaswini, by way of a revelation. Each phase of the construction was completed by the guidance of the Sishyapoojitha. On its completion, Her Holiness consecrated the golden image of Guru inside the Parnasala. The self-sacrifice as well as assistance from devotees and well-wishers along with the heartfelt prayers of all for the welfare of humanity made the Lotus Parnasala a reality. The seekers experience here the Divine Light and the grace of Guru, which transforms their life, spiritually and materially.

Her Holiness Sishyapoojitha consecrated the golden image of Guru and opened it for worship. Honorable Central Minister for Defence, Sri A.K. Antony performed floral offering on behalf of the nation.

Lotus Parnasala dedicated to the world by Her Excellency, Smt. Pratibha Devisingh Patil, the President of India.